Finally ported my races and most of my classes to 1.6. Some bugs probably slipped through, since there was a ton of stuff to port and 1.6 changed a lot of things, but I did go over every talent/effect/etc.
I also made lots of cool and sexy nerfs and a few other changes, and actually fixed some old bugs.

Oh hell yes. I recently went looking for your classes cause I was curious if Harbinger would hold up to 1.6 and was disappointed when I couldn't find them anywhere. I'll be back soon with feedback.
Let slip the toast of war.
Top

death_note is a really bad variable name. I can't recall which talent it was for now, but I spent a long time routing around to figure out that was the place I had to look to find some useful information, like damage type.
Top

Got this error leveling up the Lich's third racial talent. 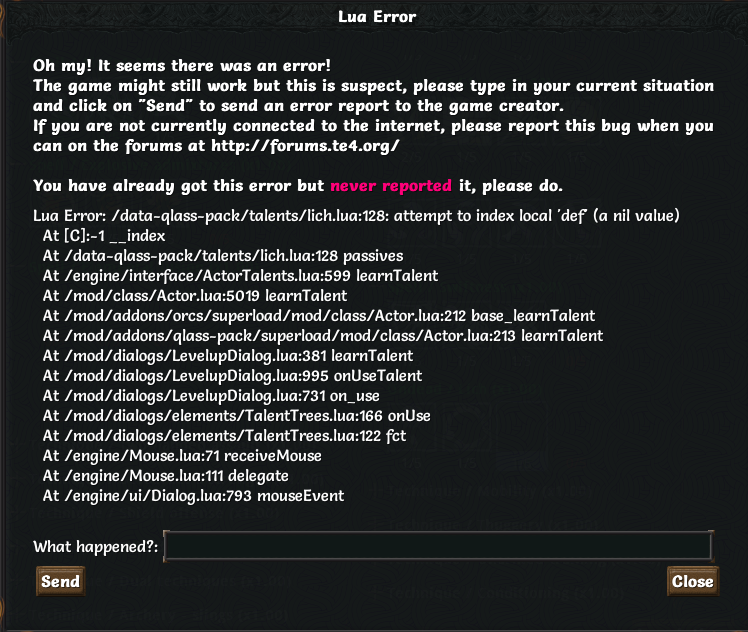 That error means that you've somehow managed to learn a talent category that doesn't exist. Can you send me a save file?
Top

Sorry if you read my earlier (deleted) posts; it took me a while to track down the root cause of the error.

I'm trying to create a bladebender but after selecting the race/class -- but before being permitted to select initial stats/talents -- I'm getting an error. (The Custom Difficulty addon is referenced in the following stacktrace, but it's a red herring.)

The root cause appears to be the beholder addon: When I disable it, I can create a bladebender without error; with it enabled, I get the error whether I'm trying to create a banshee bladebender (another red herring), or even a yeek or krog.

This is likely an error with the beholder addon and not Qlass Pack; but the former doesn't have a forum topic, so I thought I'd post here if it happens to be any easy fix on your end.
Top

I appreciate the detailed report, but unfortunately, compatibility with that addon is not attainable in a clean way from my end. That Beholder addon overwrites some vanilla functions completely without calling the original, breaking other superloads of those functions, and that happens to include some of the superloads in Qlass Pack.
Top
Post Reply
7 posts • Page 1 of 1