Level 25 insane shalore doomed, what prodigy to pick and what next?

Level 25 insane shalore doomed, what prodigy to pick and what next? 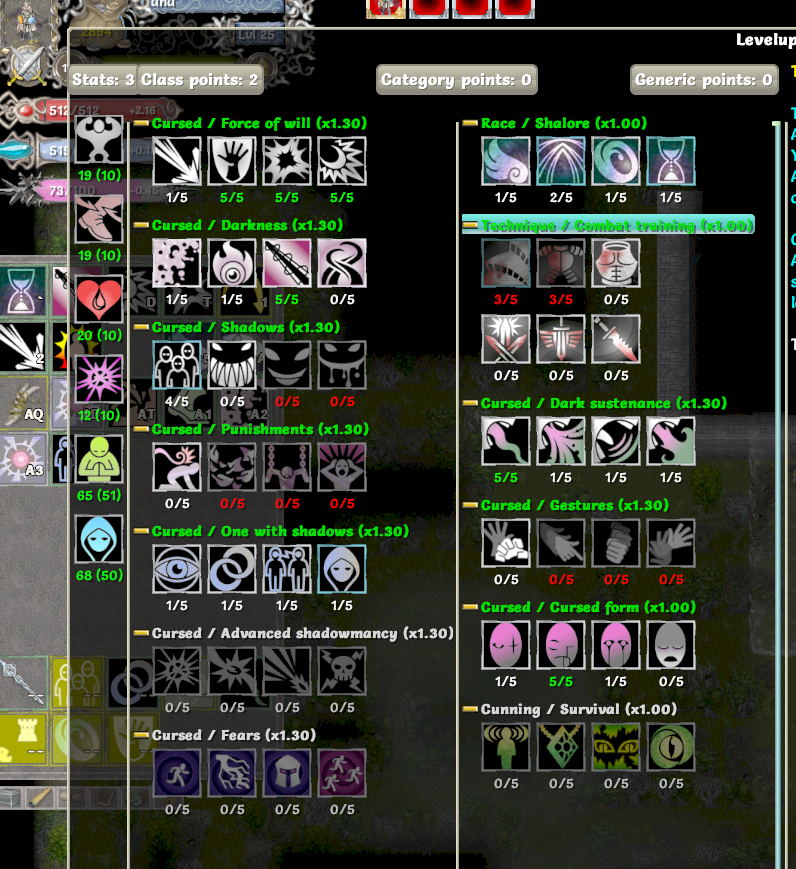 Force of Will and Darkness have been my mainstays. Hide behind creeping dark, use blast and willful strike them to knock them back, and if it's really serious use unseen force. I've mostly avoided melee.

I recently started getting shadows at level 20 not because I expect them to do good damage, but almost entirely because of Shadow Decoy. It's too good to pass up, even if it does cost a lot. It has already saved my life once. My immediate plans are to get 5/5 Call Shadows and 1/5 Focus Shadows, so that I will be able to re-summon my shadows if they are dead, to make sure Shadow Decoy can trigger if necessary.

For generic points, I intend to max out Timeless ASAP and also magic of the eternals. Maybe also get some Gestures, though I'm not sure if this is necessary. Then possibly thick skin 5/5 or heavy armor training 5/5.

I am wearing massive armor. My current armor is 71 with 88% hardiness. I'm considering wielding Blood-Letter to get +20 armor: 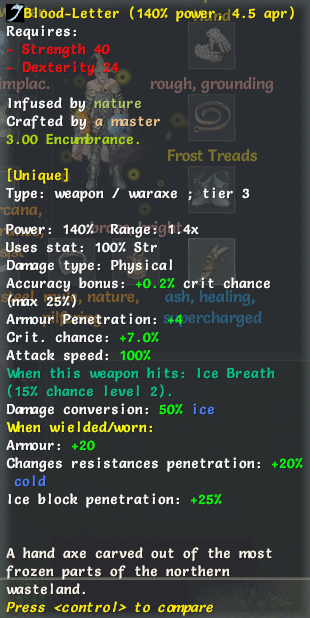 I almost have enough stats from gear to wield it.

However, I have low health, 512, and this resulted in me getting one-shot from near-full health. That's when Shadow Decoy saved me.

For prodigies, Corrupted Shell looks great since it gives +500 life, which shores up a weak point of this character. I can probably get 50 constitution if I collect some more +con items. I understand I can take 3500 blight damage by standing on blighted soil, wielding a weapon that does blight damage, and hitting myself. Siding with the Grand Corruptor requires 11 levels in spell talents. I think the Shalore racial talents would qualify. I have 5 levels in them now, which will be 6 as soon as I eat the sandworm queen heart. I can also take a point or two out of Thick Skin, giving 7 or 8 points in Shalore racial talents. That means I could potentially get Corrupted Shell by level 28 or 29.

Another one I'm thinking about is Blighted Summoning, which looks like it will give my shadows bone armor. This will keep them alive, which again will make sure Shadow Decoy can trigger if I die. I do want to be sure that this actually works on shadows. I already qualify for the talent by having summoned 100 creatures (shadows), the only thing I would need is to gather +mag items to get 50 magic.

Then there's Revisionist History, which also looks like a great way to safeguard myself against sudden death. To get it I'd need to time travel at least once, and I'm not sure if I can manage that on this character. Is visiting the time portal in Daikara enough?

And of course there's Adept.

Aside from survivability, there is a question of whether I will be doing enough damage. My fights do tend to have a lot of waiting time for cooldowns. My options as I see them:
Top

Definitely not (3).
Fears is alright, it should work against all the important enemies like orcs and final bosses, you're past the point where I'd worry much about fear not sticking (Reknor, since it's full of trolls) so the only remaining annoying enemy type should be the undead. Fear's downside now is that it's still an RNG category but it does its job over time. 2 out of the fears you get are good (cooldown and detrimental based damage), one is okay ish (save and resist reduction) and one is situational (paranoia only works against mobs). It's still a good category that can do a lot for a 1 turn investment and since you have adept even 1/1/1/1 here is good, 5/1/1/1 if you like it.

For prodigy you could comeback and get corrupted shell if you're keen, it should be alright. Else Draconic Will and Spine of the World are good.

Another choice is to get advanced shadowmancy for Merge, which is a -50% damage reduction to one enemy. It costs one shadow so it makes it slightly more risky to rely on Shadow Decoy, but adequately equipped in solo situation -50% damage makes it impossible for you to die in the first place.
Top

It's been a few releases since I last won with a Doomed, so by all means listen to someone with more recent experience than me.

Corrupted Shell is indeed an interesting choice I would not have otherwise considered for Doomed, and you should be correct that Shalore talents count towards it; you could also look for gear that grants talent levels in spells -- I believe those should also count. Given your current setup, this seems like a better defensive prodigy for you than Armor of Shadows, and a lot easier to get to than Cauterize.

While Adept is always at least reasonable, in my mind much of the value it brings Doomed is boosting Cursed Aura, which you've passed on.

I've played a fair amount with Blighted Summoning on Adventurers -- it does indeed work on shadows. However, I would not consider bone armor on shadows alone enough to justify a prodigy. Investing in Magic simply to boost the shadows' spellpower seems a bit much to me, and you have no real synergy with Virulent Disease.

From what you're describing of how your run is going, I'd strongly consider Corrupted Shell for a defensive prodigy. After that, I'd be looking at an offensive prodigy -- Master of Disasters, Superpower, or Endless Woes.
Top

On a Doomed, prodigies are kinda weird.
Adept will give you a fourth shadow if you want that and will also boost your curses (although you didn't go for that.)
Another kinda interesting is Mental Tyranny - although you'd need to invest in Madness for that. It basically means everything you do can trigger Madness, meaning your enemies will be debuffed pretty much all the time.
The last option is a very acquired taste, but I rather like it: Range Amplification Device (if you have the Embers DLC). This one is for a "pure caster" Doomed - the fatigue penalty does not matter once you get some "hate on mental crit" gear and the range increase is rather neat.

Those three are what I find myself picking most of the time - and yes, Corrupted Shell, Drac. Will and Spine are all viable options, but I don't use those often, so I can't really rank them.
Meteoric Crash might also be a good option if you meet the requirement, due to it giving you a reliable stun.
Breaking Projection since 1.5
Top

I forgot to mention that Ethereal Form is also a good choice if you're looking for more mitigation. Even if you don't build defense, you tend to weave in and out of combat with darkness and teleportation to rebuild stacks and penetration stats are nice when you have 3 elements going. For me it's kinda equal between Draconic Will, Spine and Ethereal Form.
Top

I couldn't beat the Grand Corruptor - too much damage per turn, too many unmanageable debuffs. So I took the Adept prodigy and am very satisfied with it. Everything is just better across the board, and I only need 3 points in a talent to get the level 5 bonuses from it.

I went with Advanced Shadowmancy. Shadow's Path is amazing, both high damage and getting the shadows where I need them. Stone is great too for the same reasons, plus it distracts the enemy from me. Merge is good in theory, but the problem is I always need a couple shadows around so that Shadow Decoy can work, so I'm often reluctant to spare a shadow for Merge. Cursed Bolt is decent, usually if I've just used Shadow's Path so my shadows are all in range of the target.

Advanced Shadowmancy is a whole different style of play, where you can fight and kill enemies at long range, up to range 10.

The combination of Shadow's Path with Shadow Transposition is, in theory, a targeted phase door that works unfailingly through walls. Nice to have an extra escape if I need it.

My shadows tend to die at an alarming rate, and I'm always counting the turns until Focus Shadows cools down and I can resummon them. So for my second prodigy I'm thinking about Blighted Summoning, which will give them bone shields. Not sure. How many charges will the bone shields have, considering my current Magic is only 18, and my Spellpower is only 21? The spellpower of my Shadows is 48 right now. If they only have a couple of charges then maybe it won't be worth it.

Or I could get Corrupted Shell, Draconic Will, or Spine. Ethereal Form gives a bonus that scales with Magic and Dexterity, neither of which I have taken, but on the other hand +25% all resist by itself might be as good or better than Corrupted Shell. There is some question of whether I can actually get 50 magic and 40 defense at the same time to qualify for it.
Top

Berder wrote: ↑Tue Jun 22, 2021 6:46 pm I'm thinking about Blighted Summoning, which will give them bone shields. Not sure. How many charges will the bone shields have, considering my current Magic is only 18, and my Spellpower is only 21?

The number of bone shields is based on talent level, not spellpower, and Blighted Summoning grants talent level 3. So your shadows should get two shields.

Spellpower does affect the threshold at which the shields block damage, and that should run off of your shadows' spellpower.
Top
Post Reply
7 posts • Page 1 of 1